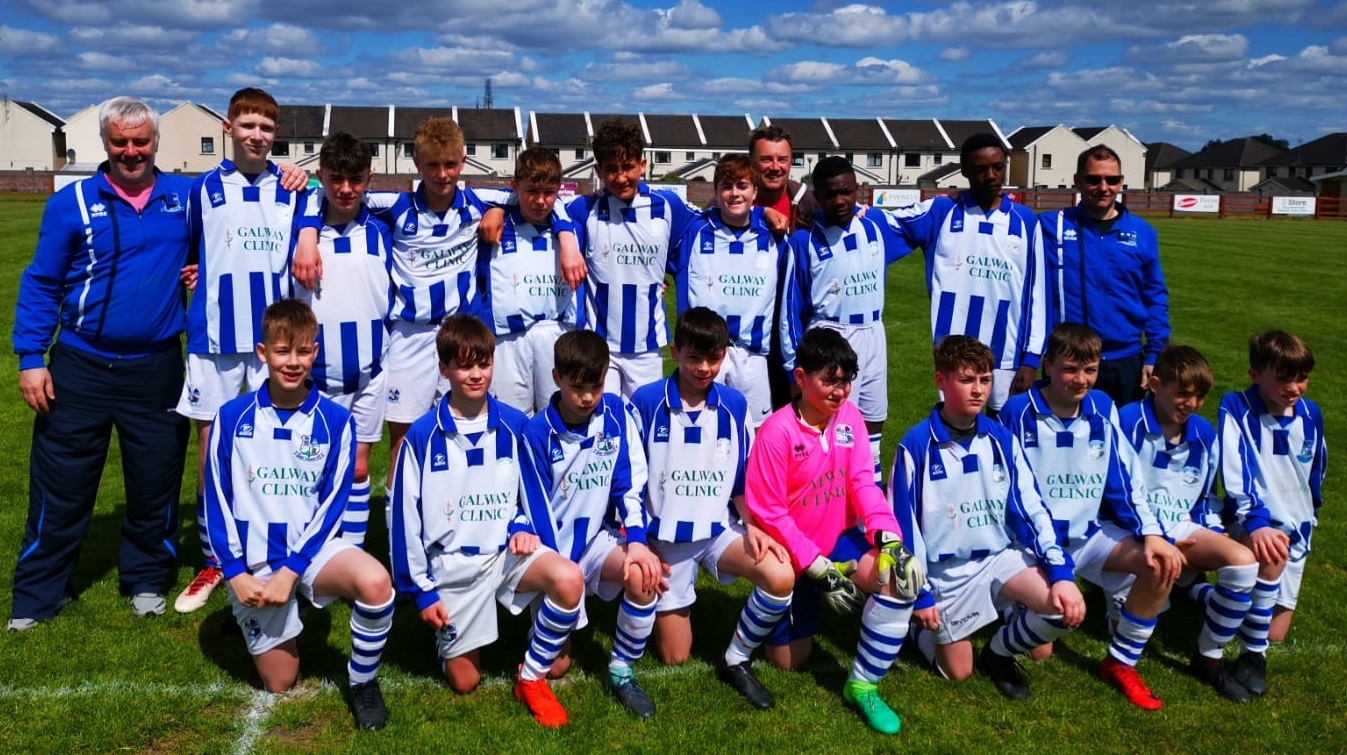 A second piece of silverware in a week for Galway Clinic sponsored community based soccer club Maree/Oranmore fc with the clubs u14 Division 2 side winning their League with two games to spare, winning 12 out of 12 League games played. Last Saturday they pipped nearest challengers Tuam Celtic 3-2 in Tuam with striker Luke O Connor once more notching a brace. This has been an excellent season for the lads managed by Tom Reddington, JP Bradley and Eoghan Griiffin with great commitment from the squad. The U14 Premier side meanwhile continued their recent good form with an excellent but hard earned 3-1 away victory on Sunday against Knocknacarra fc in Cappagh Park with Ben Costelloe netting a hat trick for Noel Carrolls charges.

The u15 Premier League side had an excellent 3-1 victory against Renmore afc in Oranmore last Saturday and they now have just a single League game left v Mervue.

The u12 Premier League side meanwhile played well in Fahys Field and came away with a 1-1 draw in an exciting encounter with Charlie Healy netting.

The u16 girls meanwhile came away with an excellent 3-0 win in the Championship semi final at home to neighbours Colga fc with the goals courtesy of Ailbhe Doyle(2) and Holly Comer.

The u18 Premier Boys will play their final League game this week away to Mervue knowing that a win is necessary to secure the title. On Thursday last they drew 2-2 away to Colga fc with Colga netting with 3 minutes remaining. The Maree/Oranmore goals came from a brace from Princewell Diala. This was an exciting and keenly contested game between two local rivals.

The u16 Premier side were pipped midweek in the Galway Cup semi final in Oranmore against National u16 Champions Salthill Devon on a thrilling 5-4 scoreline. Leading twice this was a tremendous battling performance by an understrength Maree/Oranmore side with powerful performances from Ciaran Black, Oskar Seeker, Michael Cotter, Diarmuid Murray, Eoin Ahearne, Conal Doyle and Gavin Smyth. The lads have two remaining League games left.

Our Academy sides(u6 to u10 boys and girls sides) had their last Training on Saturday last for the season.On Satuday morning the u6 boys travelled to Clarenbridge to play a series of mini games v Colga fc. 24 club lads travelled. Thanks to our own coordinator Paul Rigney and his coaches and to Julian Sammon of Colga.

Our u8 boys travelled to Drom on Sunday last to play a series of games v Salthill Devon.Thanks to our coordinator Damien Murphy and Devon coaches Shane Cox and Noel Holland.The u6 girls also had a mini blitz on Saturday,thanks to Tom Kelly and Brian Murray for their hard work.

At adult level a depleted u21 side went down to Athenry fc while the adult reserve side were leading 3-0 away also to Athenry fc but on 66 minutes, the crossbar broke after a screamer from Mike Lafferty connected with the crossbar with the ref calling time in a bizarre incident.