A busy weekend with mixed results for a plethora of Maree/Oranmore fc teams in competitive action.

Our girls side also sponsored by The Galway Clinic had two fine wins on Sunday last. The u17 girls defeated Moyne Villa on a 4-1 scoreline in League action with a brace from Aisling Quinn and goals also from Nicole Duffy and Ailbhe Doyle. The u13 girls played well and eased past Bearna Na Forbacha B on a 2-0 scoreline with goals courtesy of Emer Brosnahan and Shauna Byrnes.

A special word of thanks to OranPrecast who are kindly assisting our girls coaching programme.

The St Columba's Credit Union Invitational Tournament continued on Sunday last with the u9 and u10 boys and u10 girls in action in a fun filled sunny afternoon played in front of large crowds. The Tournament will continue in January. 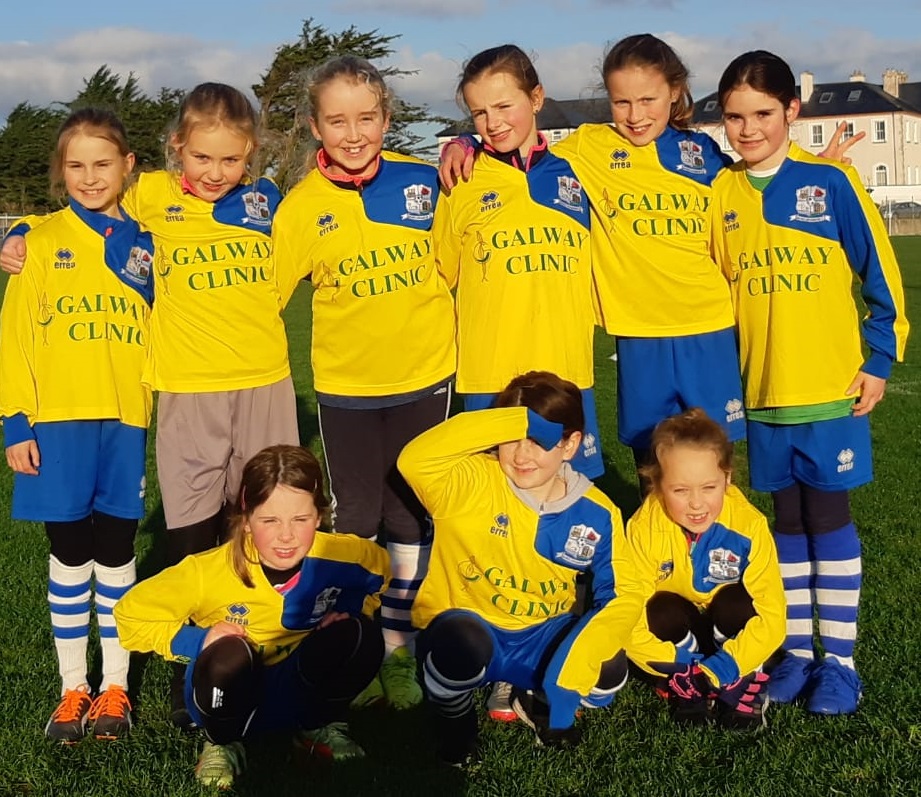 The u18 Premier boys came from 1-0 down to defeat a good dogged Kilshanvey Utd side on a 3-1 scoreline in Oranmore. This makes it four wins from 4 league outings. The goals were courtesy of a brace from Eoin Lyons and Ciaran Black. Jamie Flanagan played very well between the posts when tested.

The u15 div 1 side travelled to Carraroe to face Cois Fharraige and came away with a thrilling 4-3 win with goals from Thomas Griffin (2), Luke O Connor who gave a man of the match performance and Maxime Ludjankov. Best wishes to Eimhin Carroll who picked up a fractured foot accidentally.

Not so fortunate were the u15 Premier Lads who went down 3-2 to Knocknacarra fc in Cappagh Park.

The three u11 boys sides played Tuam Celtic, Salthill Devon and Knocknacarra fc away in a series of mini games in Tuam, Drom and Cappagh Park respectively. With great numbers Maree/Oranmore fc are grateful for all the hard work put in by coaches Mike Burke, Frank Mannion, Hubert Brennan, Alan Aherne and Donal Lernihan with the lads.

Disappointment for our Adult Premier side who went down 4-2 to Corrib Celtic away on Sunday morning. Goals from Kevin Horgan and a Chris O'Dowd penalty was insufficient. A win next Saturday v Loughrea in Oranmore is needed for this injury ravaged side.

Meanwhile the u21s play Colga fc in the League on Wednesday night, while the Division 3 side are away next Saturday in Kilconly to Kilshanvey Utd.

Thank you to all who attended our well attended General Knowledge Table Quiz last Friday night in Keanes Music venue Oranmore. Well done to the winning team who scored 94 of out a max of a 100 namely Emily Kelliher, Brian and Yvonne O'Shea and Caroline Coyne.

The winners kindly donated half of their winnings back to our club and half to the St Vincent De Paul Society. Thanks to Wesley Coyne and Martin Horgan who coordinated the evening, to Tony Jordan who compiled the questions and to Mike Quirke, David Watterson and Kevin Costelloe who assisted on the night.

Thanks to all local businesses who sponsored spot prizes.

Our club Last Man Standing as of last weekend was down to 71 punters still standing. Any questions feel free to contact excellent coordinator Brian Geraghty on 0851333516.