Oranmore F.C. played their home games on the excellent grass surface located at Ard Na Mara, behind the Astro Turf pitches, in the centre of Oranmore village.

Oranmore Football Club was founded in 1989 and up until 2011/12 season the Junior team competed in the Galway & District League Premier League with a second squad competing in the fourth division.
The team played in an all red strip with an all white second kit.

Maree Oranmore FC hosts the St Columba’s Credit Union Invitational Tournament in Oranmore Village for local teams aged U7 to U10 from November to April. U7 to U9 play on Astro and U10’s in preparation for the Galway & District League, play on grass. 2015/16 season saw the commencement of a girls section of the tournament.

Over 70 teams made up of over 800 children from Clubs including Maree/Oranmore FC, Mervue utd, Cregmore /Claregalway, Kinvara Utd, Kiltullagh Pioneers, Corrib Celtic, Colga FC, Craughwell Utd and Athenry have all taken part in recent years. 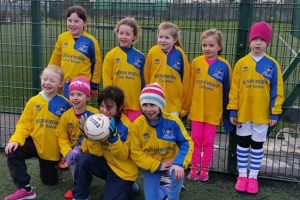 The Success of the Tournament has been down to a band of willing Volunteers, Galway County Mayor Liam Carroll and Dominic Delany were the original Tournament Directors, with Martin Joyce taking over in recent times overseeing the growth of the event into a magnificent spectacle in recent years culminating in a Finals Day with Parade of Champions, medals for all competitors and a trophy for each age group.

With the emphasis being non competitive, solely for the kids enjoyment, the Club introduced a “Silent Sideline” which allows the kids to get on with it without being coached! 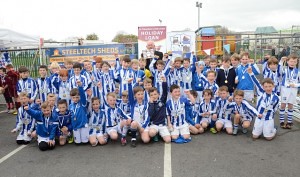 The Club is proud to be playing their part in attracting business to Oranmore Village which has been boosted by the regular influx of Parents and Supporters of the youngsters.

Behind this and the Oranmore Church are two Astro Cages and two grass soccer pitches with a further 2 mobile changing rooms and toilets.

From Galway, at Maldron Hotel roundabout, take third exit Oranmore turnoff and drive to T junction, turn left at T junction and straight on through village, Astro and Pitches on right from Limerick, take first left after mini roundabout on approach to Oranmore.