Maree Oranmore Juvenile Soccer Club was established following a series of public meetings in February / March 2005 to determine the level of interest in the community for children’s soccer. The original idea was floated by Joe Broder who contacted several local residents including the then Maree Curate Fr. Adrian McGrath, Liam O’Carroll, Tom Broderick and Martin Horgan amongst others. 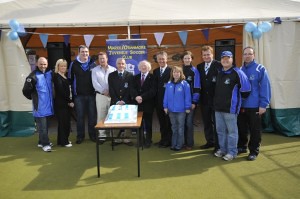 The impetus generated at the public meetings (one of which attracted over 100 parents to the Oranmore Lodge Hotel) led to the formation of a working committee to move things forward. An open day in April 2005 attracted over 200 children and thus the beginnings of a properly structured parish, community based club began.
Soccer has been played in the parish for many decades and Maree Oranmore Juvenile Soccer club is based on the entire parish community of Maree Oranmore. As an organisation the club works closely with all other sporting / community groups in the parish for the greater good of all.

The original Club Crest was designed by Nicholas Sheehan, A pupil of Scoil Iosaf Naofa Boys National School as part of a primary schools competition to design a club crest appropriate to the parish. It shows the features of the Castle and the Well representing local landmarks, and the sail / fishing tradition of the parish.

The Club has had significant success in the Galway & District league and cup competitions in its short history in both the Boys and Girls Divisions.

To this day a dedicated team of Volunteers run the Club and organise regular weekend and midweek training for over 450 children and coordinate Annual Events such as the Club run Invitational Tournament for local teams at Under 6 to Under 10 ages.

In August 2012 the Club merged with Oranmore FC Junior side and Oranbay 90 Junior Side to form a united Club, Maree Oranmore FC.

Oranmore once again achieve promotion finishing second to West Coast United but the season will mainly be remembered for a historic run in the FAI Junior Cup reaching the last 64 in the country being beaten on penalties by Rattoo Rovers the Munster Champions.

The Club finally achieve a long held ambition when securing promotion to the Galway and District League Premier Division under the Management Team of Murt Fahy and Ollie Neary.

The club finishes in a respectable fourth place in the premier league with a mixture of good wins against the strong teams and losses against the weaker teams.

Adult side promoted to Premier Football and club honoured with our first full Irish u18 International Matthew Barrett Folan who played against Wales.