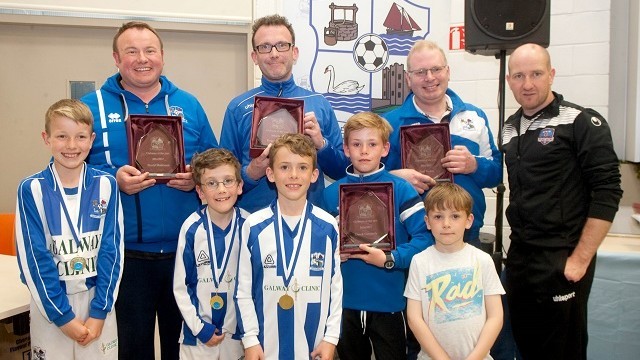 Maree/Oranmore fc adult A side will be playing Premier football next season after a comfortable 5-1 win last Saturday in Oranmore against fellow promotion challengers West Coast Utd.The goals last Saturday were scored by Malachy Black,Matthew Barrett,Reggie Ahiable and a brace from the excellent Conor Murphy.Over the course of the season this well organised and drilled side won 13 of the 18 games,they will join Renmore Afc in the Premier Division next season.Great credit is given to manager Emlyn Long and his assistants Mark Tully and Pete Campion and to the hardworking squad of players captained by David Devlin.

The u12 Premier side had a fine 3-0 win against Galway Hibernians as they battle at the top of the table,The goals came courtesy of Ryan Mill,Jamie Cullinane and Jamie Cullinane.Manager Noel Carroll assisted by Tony Long have worked hard with the squad.

The u14 girls last week were held to a scoreless draw by a defensive and determined Corrib Rangers side,they finished third in the league after excellent work by all the girls and the management duo of Tony Jordan and John Brogan.The u14 premier boys are down to play their Premier Cup final v Mervue this thursday at 7.30pm in Eamonn Deacy Park,Terryland.All support would be appreciated.Our club are grateful to Supermacs Oranmore for sponsoring training tops for the lads.

The winners of our first members draw to help finance a  new 4g pitch facility for our community were First Kieran Blake(200e),Second James Fallon(100e),3rd Eoghan Griffin(50e).Spot prizes of upcoming tickets of Ireland v Uruguay went to Enda Cox and Gerry Walsh and Christine Watterson won two free places on club organised FAI soccer camp in August.Our members draw has been a great success,parents can still sign up for less than a fiver weekly to www.mareeoranmorefc.ie  Our next draw will be in June,date and venue to be announced.

Thanks to club executive member Frank Mannion who organised very enjoyable end of season events for club volunteers including golf and a very enjoyable table quiz in the Porterhouse Oranmore.For all club details visit us on facebook or www.mareeoranmorefc.ie