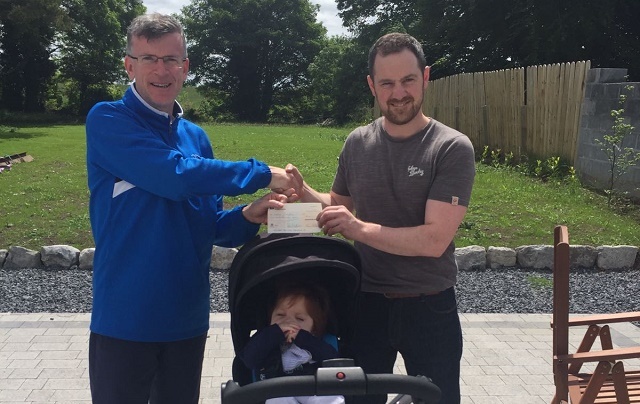 Thanks to all who have signed up for less than a fiver a week in the Maree/Oranmore fc members monthly draw to build a new full size 4G pitch for the kids in our community. Our second monthly draw will be in June with cash prizes on offer, our first draw (May) was won by Kieran Blake of Maree, second was James Fallon of Oranmore and third prize went to Eoghan Griffin of Maree, thanks to Ollie Turner of Galway Bay FM and Galway Utd's manager Shane Keegan for their assistance with our opening draw. Sign up online now on www.mareeoranmorefc.ie

On the playing pitch, the u14 Premier Boys put in a serious performance last Thursday night in Eamonn Deacy Park in the u14 Premier cup final and were unfortunate to go down to a strong Mervue side. Mervue took the lead from the head of Rory Melody with three minutes to go in the first half. There were strong performances from keeper Eoin Ahearne and the central defensive duo of James Whelan and Tom Delany with Daniel Cahalane excelling at left back. In midfield Evan O Rourke and Cian Horgan caught the eye with Gavin Smith scoring after good work on the flanks from Horgan. Delany undoubtedly put in an excellent stint for the Galway Clinic Sponsored side with Ciaran Black and Declan Burke doing well when introduced. Our club would like to thank Joe Burke and all in Supermacs Oranmore for sponsoring training tops for the lads.

At u12 Premier level, Noel Carrolls side are battling it out at the top of the table with just two league games left to play, on Saturday last they had an excellent 6-2 win against Galway Hibernians with goals courtesy of Ryan O Donnell(2), Seamie Fallon(2), Ben Costelloe and Eimhin Carroll, they play Salthill Devon and Mervue in their remaining two games.

At u13 Premier level the lads defeated Bearna na Forbacha Aontaithe 4-0 with goals from Anthony Keady,Gavin Smith,Tom Delany and Ben Costelloe. A day later a last minute goal saw them being held to a 2-2 draw by a determined Cregmore/Claregalway fc side with Smith notching a penalty and Delany again on target.

Our girls u14 side play their semi final this Wednesday away to Mervue.

Our club are delighted to support two local deserving community projects namely Voices for Down Syndrome Galway and the Caden Geraghty Fund. Both Brian Geraghty and Hubert Brennan (fathers of Caden and Aoife) are club volunteers and integral community members. We wish both children the very best and are delighted to assist in any way we can.

We would also like to wish all club volunteers who are taking part of Strictly Act on june 17th all the best in the Galway Bay hotel. This fundraiser for ACT for Meningitis is driven by club stalwarts Siobhan and Noel Carroll.

This weekend sees the return by popular demand of Leeds utd academy manager and former England International Jason Blunt who will be hosting technically based skill workshops for mainly our academy sides and our coaches. We as a club want to achieve the best for all our club players,both developing and elite. Thank you to our club director of coaching Mike Quirke and Gerry Mc Dermott for their assistance with this programme. Visit us on facebook or on www.mareeoranmorefc.ie