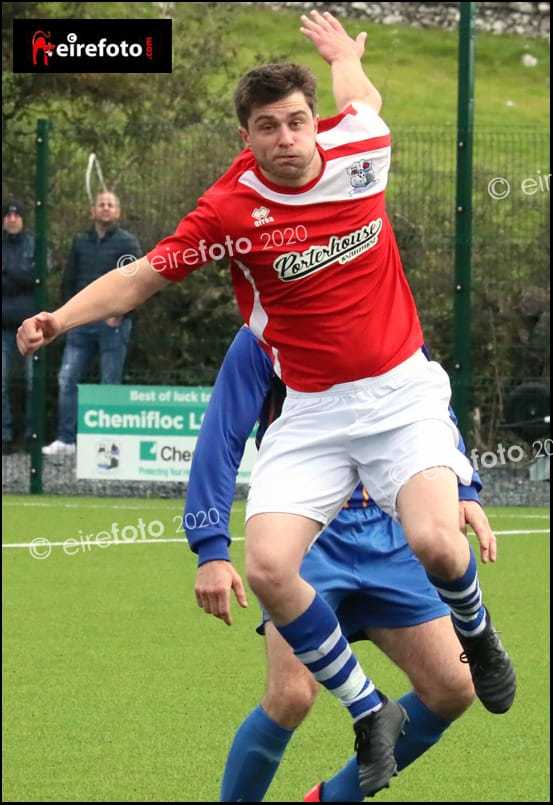 A very busy weekend for our local community based soccer club Maree/Oranmore fc kindly sponsored by The Galway Clinic with a plethora of club sides in competitive action.

The adult Premier side (pictured above courtesy of eirefoto in changed red strip due to clash of colours) last Sunday were unfortunate not to take all three points last Sunday morning on the new Maree 4g pitch when they were held 1-1 by a dogged Loughrea side. This adult Premier side is a young one and the blooding of six u21 players last Sunday in the starting 11 is a vote of confidence in youth blended with more experienced players. A strong display from players like Eoghan Mc Donagh,Shane Cox,Declan O Dea and the industrious Malachy Black who set up the opener for Princewell Diala to score. A penalty miss prevented a deserved win for Brendan O Connors charges alongside the hardworking Rob Hannan,Noel Greaney and Mark Tully who make up the industrious management team.

The Adult B side play in Division three and they drew 2-2 with Corrib Celtic in Annaghdown last Saturday afternoon with a brace from Steve Matthews. This season the club will also field an u21 side and a newly created adult A side managed by Frenchfort, Oranmore native Paddy Fahy. The numbers indicate the healthy growth in adult membership of recent years.

The u18 Premier side played their opening League game on Sunday afternoon in Drom and they came away with a fine 6-1 victory against Salthill Devon with goals courtesy of Ciaran Black(3),Ben Taylor,Killian Bolly and Jake Corbett. There were good performances throughout the pitch with Daniel Cahalane,Cian Horgan and James Whelan doing well alongside the much improved Daniel Carr who put in a fine stint.

The u16 Premier Lads had to work very hard on Sunday last to defeat a good Colga fc side on a narrow 2-1 margin in Oranmore. The goals came from Daniel Keady and a Seamie Fallon spotkick. The u16 div 1 side were a little weakened on Sunday last but they put in a spirited performance but went down 2-1 to Athenry with Tom Griffin netting.

The u12 Premier side under Mike Gandhi Burke and Frank Townie Mannion had an exciting 1-1 draw with rivals Colga fc last Saturday afternoon in an evenly matched contest with Yassin Abdelmagied scoring. Donal Lernihan's u12 div 5 lads had a fine home win on Saturday last against Bearna Na Forbacha Aontaithe with the goalscorers including a brace from Alan Burke,Charlie Dowling,Harry Lernihan,Michael Melville and Ethan Burke. The u14 championship side were unlucky to go down 2-1 to Tuam Celtic A  with Oisin Stack scoring in a game where  Rory Kelleher gave a man of the match display with his very tenacous and determined play.

The u15 and u19 girls went down to Corrib Celtic and Oughterard afc respectively in League action but the u12 Eagles and Hawks sides drew with Moyne Villa on a 1-1 and 3-3 draw in Headford.The Eagles goal came from Arabella Fallon while the Hawks goals included strikes from Labhaoise Keane and Roisin Mc Carthy. 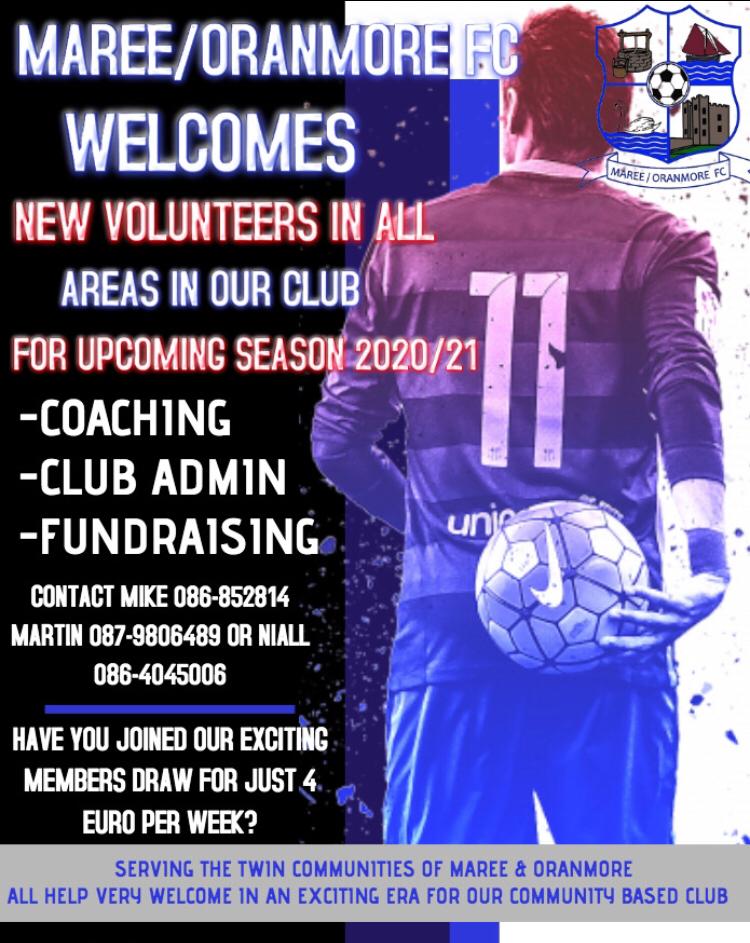 The numbers at our Academy(u6 to u10) Training sessions continue to grow with over 240 kids in those age categories now registered. The u6,u8 and u10 girls are on from 11.45am to 12.45am,the boys u6,u7 and u8 are on from 1pm to 2pm while the u9 and u10 boys are on from 2pm to 3pm. Membership Registration for all age groups can be done by downloading the Clubzap app (My Club -> Membership). Additionally, attendance records are managed via the ClubZap Chat group per age group. 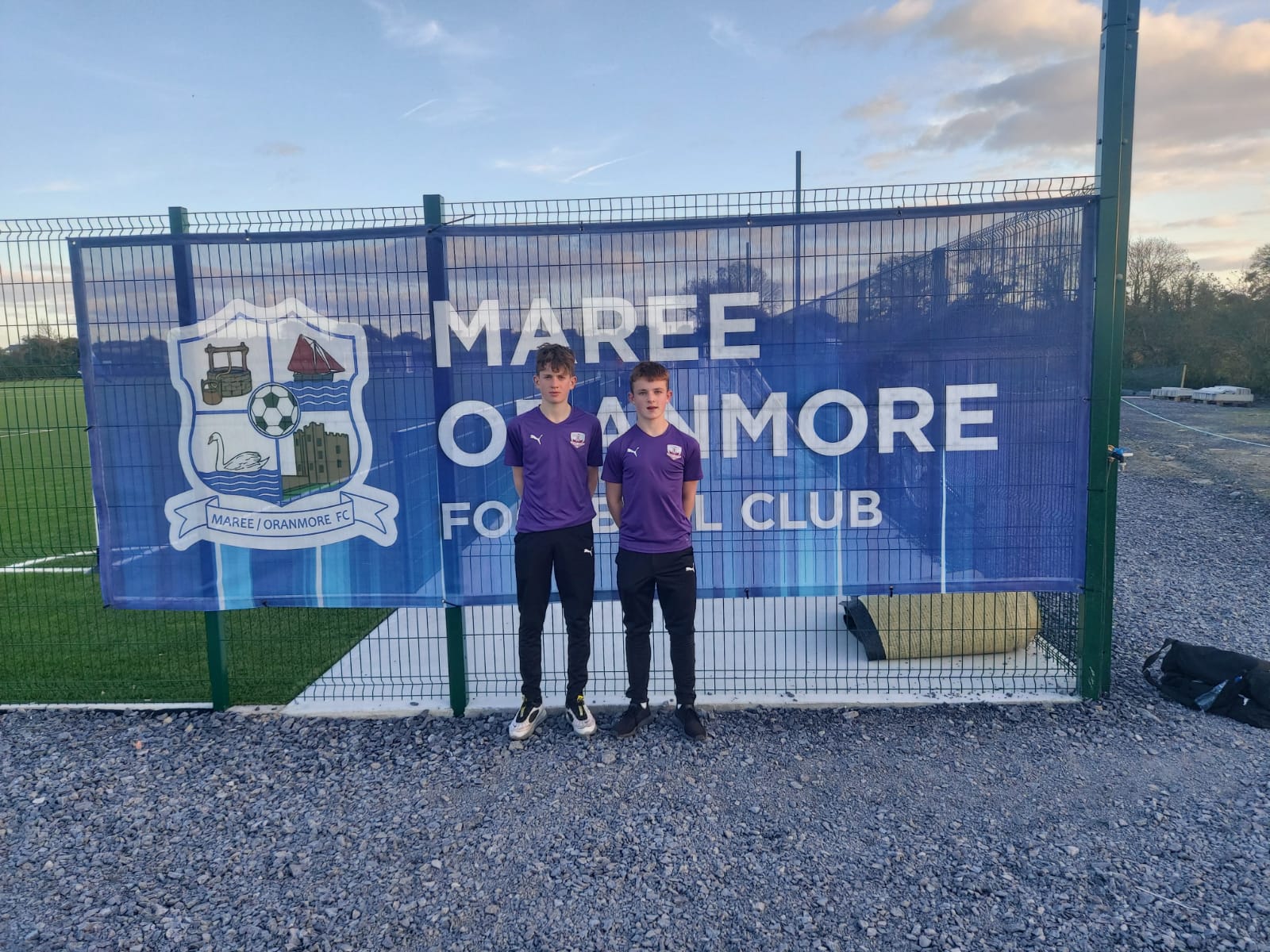 Well done to Tom Delany,Conor Daly,Colm Whelan and Shay Rabbitt who featured in Galway Utd underage sides over the weekend.

As you know we are inviting club families to pay the equivalent of a price of a cup of coffee per week to help in the repayments on our new community facility, this is our monthly members draw and this months draw takes place on Monday Sept 28th at 1.30pm and will be recorded live on our club facebook page.For further details contact Fergus on 087 2457626. 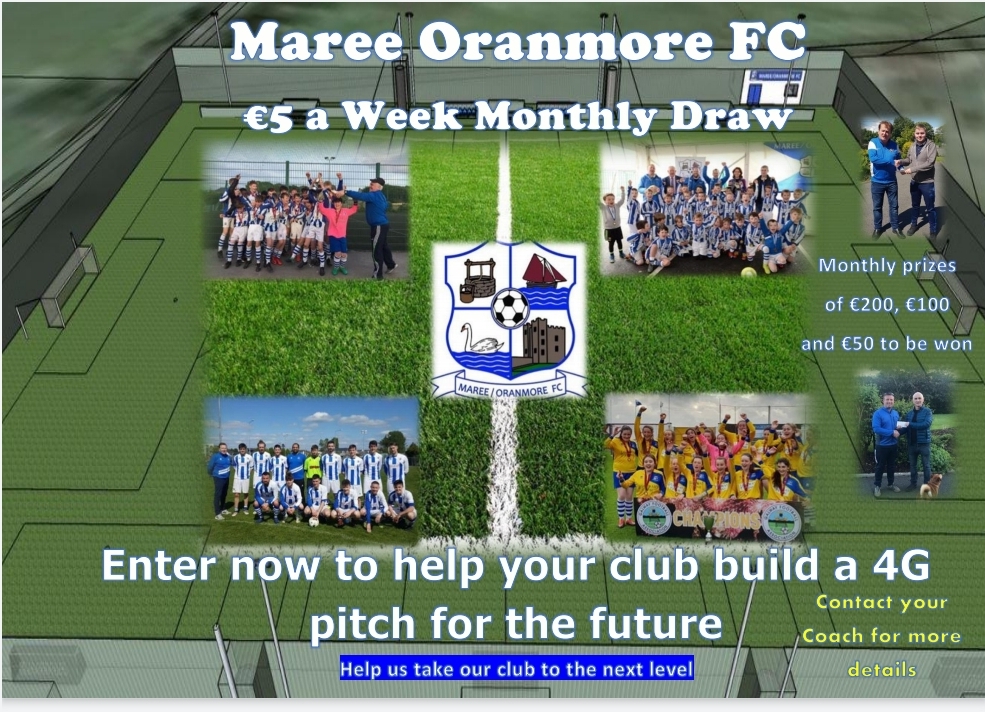 For all club details,visit our club facebook page. The ClubZap app is used for all team communication and attendance records.

Make the most of the coaching downtime! Online PDP2 cours...

On behalf of us all in Maree/Oranmore FC we would like t...